The Letter-winged Kite is an emblematic bird of the dry interior of Australia. People drive for miles up the Strzelecki track or over toward Birdsville on the Queensland/South Australia border. They feed mainly on the native Long-haired Rat and when conditions are right and the rat breeds in large numbers the kite population can explode. Sadly, when the rats die off the kites struggle for food and disperse, looking for food. This is rough on the kites but for birders the kites can end up a long way from home. This one was in north-west Victoria, some 800 km from their normal range.


To add the bird to my Victorian list and enjoy a weekend in the country I and 4 friends drove to twitch this rare visitor. The drive took us through wooded grazing farms and out onto the flat northern plains. As we came onto the plains there was a heavy, low ground fog with clear blue sky above it, an then something I had never seen before, a fogbow. I am so glad I had friends along to share this special sight. 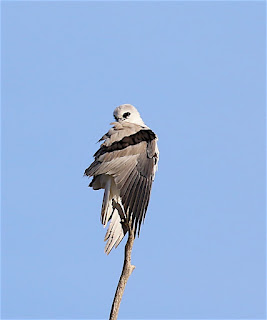 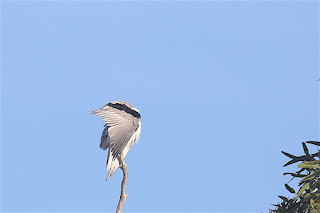 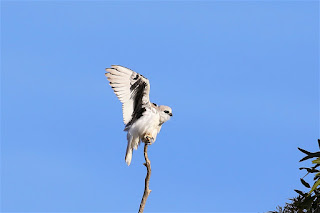 We had left early so as to get there before the bird left its normal roost tree and got there at about 0900. The tree was on a dirt back road and as we turned off the highway the standard question came up “how will we find the tree?”. Easy, the land around Rupanyup is dead flat wheat farming land. Driving toward the road we wanted finding the tree, and the bird, was easy … there were about 10 cars and 15 people who all had cameras and binoculars pointed at a bird silhouetted against the sky, sunning itself in the morning sun. By the time we left the group had grown to 20 cars and 36 people, a big twitch by Australian standards. 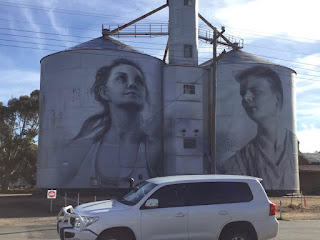 After chatting and watching the bird we drove into Rupanyup and got fuel and food and took photos of the local wheat silo. It is one of a series up that way and each town has had an artist paint local scenes on their silo with the result that they have become a real tourist attraction with people traveling through these “off the highway” farm towns.

All text and images © Jenny Spry
Posted by Jenny Spry at 3:56 PM 2 comments:

Here are a few random photos from my latest trip to the islands. 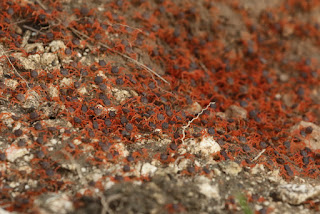 
Two busses took all our luggage and us to the boat which was a traditional old, low wooded, work boat. Our boat is the MV Surveyor and she is well named with her huge crane on the stern deck and no rear railing, just open ocean. In front of us was the much more majestic Kulasi. We were originally meant to be on the Kulasi but it was not to be.

The sea was calm with a slight s-e wind blowing as, on 1st November, we motored out from Port Moresby, New Guinea, past the channel markers with their noddies and boobies. Throughout the day we racked up 11 species including a small group of Tropical Shearwater. Sadly, however, we were still well inside New Guinea waters.
2/11
We motored into Australian waters at 0945 and the birding was comparatively quiet with only a few Sooty Terns and Wedge-tailed Shearwaters, both species that would be our constant companions throughout the trip. After lunch things picked up with large mixed feeding flocks within chasing distance. As we drew near them chaos broke out on board with species after species being called including jaegers, petrels, noddies, terns and shearwaters, including Tahiti Petrels and a Flesh-footed Shearwater. But the excitement of the day were the three megas, Tropical Shearwater, Pink-footed Shearwater and Heinroth’s Shearwater. The day finished at 2130 with people out on deck watching Red-footed Boobys that have been attracted to the deck lights.


3/11
On our second day in Australian waters the routine repeated itself; 0500 am out of bed at sunrise, breakfast and on deck to look for birds, stay there all day, dinner after sunset and in bed by 2030. Between 0600 and 1000 the birding was excellent with flocks of birds including a Kermadec Petrel, Lesser Frigatebird, White-tailed Tropicbird, Masked Booby, Tahiti Petrel and at 0700 a real mega, a Fiji Petrel. At about 1300 the wind speed increased from the s-e and drove up a very lumpy sea on top of a s-e swell of about 1.5 metres, and we were thumping right into it. Highlights of the day included a pair of whales, probably Short-finned Pilot Whales, another Fiji Petrel and, just on dusk, an adult Red Booby who rode the foredeck uplift while waiting for flying fish to rise from the water in front of our approaching boat. After 30 or 40 high speed attacks it finally caught one. By dusk 2 more boobies had joined the hunter and we watched as they settled on the handrails of the upper deck to roost.

4/11
At 0530 there were no birds in sight but our group of 3 boobys had grown to 12. By 0700 the excitement was on and we were in the midst of a mixed flock of seabirds heading from n-w to s-e. A “wedge-rumped storm petrel” was called but it later showed in pictures to be a Band-rumped Storm Petrel, another excellent bird for the trip. Soon after, two Black-bellied Storm-petrels flew into the slick and were well photographed. At about 0715 a second large flock of birds was seen but it dispersed before we could get to them. By 0730 the day had gone quiet and the group spent the rest of the morning staring at the sea and occasionally calling a “wedgie” or “sooty” to very little interest from most of the group. As with yesterday things picked up again just after 1600 with a group of some 50 wedgies, 150 Sooty Terns, White Tern, Tahiti Petrel, Flesh-footed Shearwater, Arctic & Pomarine jaegers and a White-tailed Tropicbird.


5/11
The bad weather that started on 3/11 with 15 – 20 kts from the s-e deteriorated over night with the sea rising and the wind holding a steady 20kt +, and we were no longer thumping into the waves we were crashing into them with water washing over the bow and down the decks. By morning the outlook was like a Southern Ocean deep-blue, rolling swell from the s-e with white caps but when you walked out the door of the air-conditioned cabin you were struck by hot, humid air and knew that this was not the Southern Ocean. The weather was coming from a massive anti-cyclone that was sitting over the north of New Zealand and extending as far north as New Caledonia and feeding winds into the southern Coral Sea. By 0830 the seas had risen in size and our speed dropped from 8 kts to about 4 kts. The occasional wave was large enough to bring the boat to stop as we rode up the front of it. At a guess, judging by the foam blowing back off the wave crests, the wind was gusting over 30 kts. These were bigger seas than any some of our group had seen, and perhaps bigger than they ever had hoped to see. At 0900 we had our first feeding flock of the day complete with Arctic Jaeger hounding the Sooty Terns. As with the first two days the bird numbers started to pick up after 1600 and at 1715 we found a large mixed flock of birds circling in the last of daylight. There was some sickness on board due to a stomach bug and the sea was still rough so at about 1900 the majority of the group said they wanted to turn back north. So, we turned back, still some 100 nm from the seamounts. With the wind and sea behind us we had a comfortable night but we were motoring away from a long range of seamounts before we could check them for birds. Weather is always such a problem on a pelagic.


6/11
At 0600 when I came on deck the seas had calmed slightly with no whitecaps but still a 1 – 1.5 m swell. There was a smattering of birds with some 15 Wedge-tailed Shearwater, a Great Frigatebird and 10 Sooty Terns. I also realised that we were in the Coral Sea approximately where the Allied Fleet were in WWII during the battle of the Coral Sea in 1946. It is strange to see the sparkling blue of the water and the pale blue sky dotted with clouds and think that people fought and died here on a battlefield with absolutely no landmarks nor remnants of the tremendous struggle that occurred.

At 1600 a mixed flock was sighted, interestingly again, mainly Sooty Terns and a few Wedge-tailed Shearwater. The birds milled about between 1 metre and 20 metres off the surface and, apart from a few tentative dives, showed no sign of feeding. It appeared more that they were congregating, perhaps before roosting overnight. In comparison to these birds were the flocks we saw in the middle of the day that are obviously feeding on Flying Fish ,and bait fish being forced up from below. These feeding flocks were mixed flocks with four or five species including noddies, terns, wedgies, petrels and tropicbirds. Jaeger and frigatebirds often attend and hunt in these feeding flocks.

7/11
Again 12 boobies spent the night on the mast and handrails. And, again, our first flock was a dispersing flock of Sooty Tern and Wedge-tailed Shearwater with a few Common and Black Noddy. Surprise bird of the trip so far was an overfly from east to west of a Great Egret. The steering died today as we did a “U” turn to chase a possible storm petrel. After 15 minutes or so of tinkering we were back underway. During the day we were constantly seeing groups of birds and, after an absence of 2 days, we had Tahiti Petrels. With our speed back up at 8 knots and the s-e wind behind us the apparent wind speed was 0, making for a hot and humid day. With the wind behind us and a north flowing current we were soon back in the waters of the first three days. This north flowing current would have, conversely, been slowing our progress as we battled to get to the seamounts.


8/11
We continued cruising north and the steering kept breaking down. Birds were around us all day with more Tahiti Petrels, jaegers, frigatebirds and the species tally for the day was again back up to 14. One interesting thing is that species diversity per day had dropped to 7 or 8 as we went south and now, as we head north, it climbed again.

9/11
At 1000 we came across a large feeding flock including some 100 wedgies, 100 sooty, 20 Common Tern, and a Lesser Frigatebird. At 1717 we turned around and started back along the wake. Within minutes the call went up “stormy in the wake”, and we had another Black-bellied Storm Petrel for the trip list.

10/11
The bad weather continued, and if anything increased. Tahiti Petrels were seen in the wake and around the boat as we motored down-wind until after breakfast. Then at 0945 we changed direction to the e-n-e and entered New Guinea waters again. The seas where now arriving on the starboard quarter making for a very unpleasant rolling day. The auto-pilot died again and for about an hour we were being steered by the beautiful wooden wheel.


The weather limited the distance south we could travel but it was still a successful trip with a greater number of species seen than some people predicted and possible range extensions and seasonal extensions found for some species.